“They were a real fan favorite and got a great reaction from the 297 audience members in attendance,” Mrs. Jones said. “After the Lip Sync Competition, the motivational speaker and illusionist Brett Shaw spoke to us about the four keys to working as a team or being a good team member.”

These keys are:
#1 Having a vision
#2 Motivation
#3 Trust
#4 Having a mentor or coaches

Jones said Brett Shaw also provided illusions and interacted with and engaged the audience as he delivered his message.

“After the motivational speaker was finished, we had our district business meeting and students were encouraged to participate in STAR events and other national programs, run for district office, and get involved in FCCLA as a whole,” Mrs. Jones said. “Overall, it was a great day and Southeast was represented well with one of the schools with a larger turnout of 15 students present.” 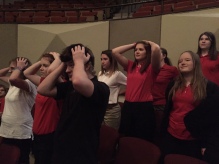