WEIR, Kan. – The Weir Public Library has opened its doors in their new location and the Southeast 3rd grade class was some of its first visitors.

The new location is at 111 East Main Street in downtown Weir, right next to CBW Bank, who provided the new building. The City of Weir is also ordering new computers for the location.

The new library opened its doors on Monday April 24, 2017, and on Tuesday the 25th, before going to the Weir Park for their annual clean up day, the Southeast 3rd graders stopped by and was introduced to the new library by librarian Katherine Bandy.

Bandy said one unique feature of their library is that they no longer collect monetary fees for over due books. Instead, patrons returning late books are asked to donate canned goods, which are then placed in a Blessing Box in downtown Weir. 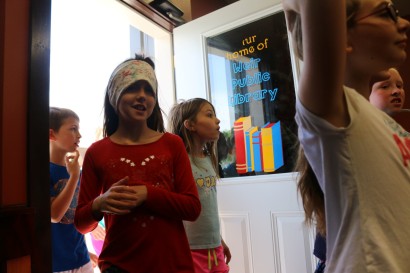