If you think doing well at a Spelling Bee is only about knowing how to spell, you’ve never been to the county spelling bee. Focusing during mental fatigue and fighting off the pressure are part of the challenge as well, and Friday’s Crawford County Spelling Bee was one of the fastest Southeast Junior High teacher Marta Ward could remember.

By the end of the fourth round the number of participants had dropped from 37 to 4, and the winner was decided following the 25th round.

“I felt like today’s was the fastest one we’ve had to get down to the final kids, that’s just my opinion,” Mrs. Ward said.

Southeast Elementary and Southeast Junior High each had three students in the county competition, and none of them survived past the third round in what seemed to be a particularly brutal contest, especially early on.

“I would rather it be they had easier words the first couple of rounds to help build their confidence, but it didn’t work that way,” Mrs. Ward said.

The bee is not designed to be easy. Mrs. Ward is the Spelling Bee coordinator for the Southeast Junior High annual bee, and she explained that the words used are not just drawn out of a hat or chosen. It’s a list given to them by Scripps National Spelling Bee, including the order of the words.

“I don’t know if people understand that everything is scripted – I am given the list,” Mrs. Ward said. “There’s no deciding ‘we’re giving the hard words first, then go to easy ones’ – that’s already been decided for the host. Everything is given to us – the definition is there, the sentences are there, it’s all scripted.”

Getting past the first few rounds is frequently the most challenging part because knowing how to spell the words is only part of the competition. First, you have to get over the stage fright.

“I think that the students do feel a little bit nervous being out in front of the crowd, especially for the younger students or the ones who are in this the first time,” said Southeast Elementary School 4th grade teacher Becky Martin. “I have noticed that it seems that by the fourth grade they have probably been a speller before. We also practice in the room by playing Sparkle and different games.”

At the local level, the stage fright is there because you’re in front of the kids you know.

“It’s difficult because all of their peers are sitting out there – that’s why I tell them to focus on the pronouncer as much as they can,” Mrs. Ward said. “ I tell them to focus in on me, just like they’re talking only to me. But as far as totally getting over the stage fright, I think it takes at least one round for them to be able to block it out, and then they just have to focus on the spelling.”

At the county level, the stage fright reappears, especially for those new to the county bee, because now they’re on the stage in an auditorium full of people they do not know. With the bright lights of the stage and all eyes on them, the intensity of the situation becomes a reality.

Typically, the words for the first 3 to 5 rounds are complicated and knock out a majority of the participants. This usually takes about an hour because there are so many competitors.

But, then the bee tends to shift gears. Down to only a handful of participants, the pace picks up, and words frequently become easier, every day words, with the occasional unusual word thrown in to mislead the competitors.

Anxiety turns into repetition and boredom.

Competitors bounce from sitting, to standing at the “on deck” spot while they wait for the person before them to get their word, to the microphone to address the judges, and then they return to their seat. Repeat – over and over.

The nearly continuous movement combined with trying to ignore what is going on in the audience – like yawning and people leaving, leads to competitors getting antsy, distracted, and making careless mistakes on otherwise easy words.

Experienced spellers are patient and deliberate. Before they step on the stage they have already developed a routine that works for them that allows them to block out everything going on and focus on the announcer. And they do this for every word, regardless of how easy or difficult it is.

But every participant, except one, will miss a word.

And it’s not just about simply knowing how to spell. 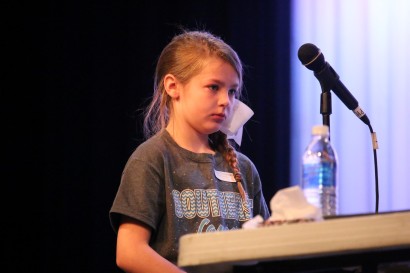