Students in the Southeast High School “Community Connections” class recently completed a community service project, making felt Halloween costumes for babies in the NICU (Neonatal Intensive Care Units) at the Joplin hospitals. Friday, these four students were able to travel to Freeman and Mercy hospitals to tour the Units and learn more about the services that they offer to the families of NICU babies.

Cassie Davis of the Freeman NICU showed our students about the 24 bed-unit that they offer to babies, and shared about the Freeman Hospital’s partnership with the Children’s Miracle Network that helped upgrade their machines and give them a $1.3 million dollar expansion in 2011. The students learned about “rooming in” and also about the passion needed to be in the nursing field, but specifically in the NICU and neonatal aspect of nursing.

Kathy Shoech of the Mercy NICU showed our students around the very new and modern hospital and talked about the differences between Freeman and Mercy. We saw another “rooming in” apartment-style room for families to gain confidence of their parenting skills before leaving the NICU with their new baby. She also gave the students a sneak peak tour of the brand new Ronald McDonald Room for families to rest and shower in, if needed. 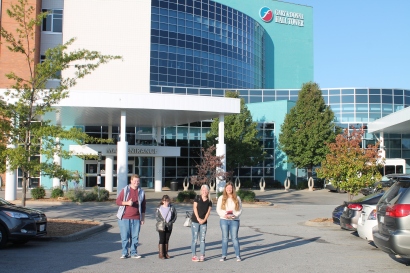 Both hospitals were very happy to receive the donated Halloween costumes from the students. They both hold “costume contests” on Halloween for their babies, but some families who have financial strains or are admitted unexpectedly just before the holiday don’t have anything. The costumes will help cheer up the families in a very stressful time.​