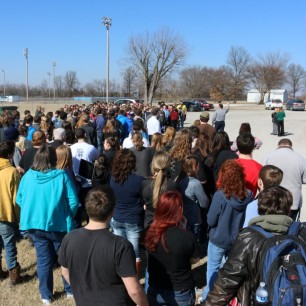 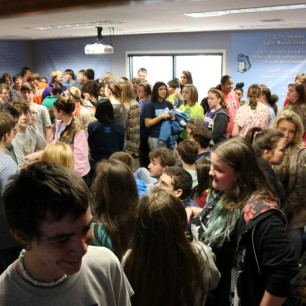 The nearly 300 students and staff evacuated Southeast High School in two minutes and filed into the nearby Board Office.  Tuesday’s drill was a part of the school’s ALICE training.

In more than 20 years of mass shooting events the majority of shootings last only two to three minutes.  The national average for emergency response time is five to six minutes.  That is according to Crawford County Undersheriff Steve Geier.  Officer Geier was at a recent USD 247 Southeast school board meeting and said that their office is training area hospitals, workplaces and school districts, including Southeast, to use a procedure known as ALICE – Alert, Lockdown, Inform, Counter and Evacuate.

Officer Geier emphasized that ALICE is not sequential.  Those being threatened should react to the situation as needed.  ALICE is simply an easy to remember acronym for ways to improve the chances of survival.  The primary purpose of ALICE is to use information and technology in a way that allows those being threatened to make informed decisions and remove as many people as possible from the danger zone.

The Southeast school buildings have new security precautions in place.

“We now have chains in every classroom so that in the event of a crisis the doors can be chained shut from the inside,” said USD 247 Southeast Public Information Officer Chris Wilson.  “This way doors can be locked and chained and no individual has to put themselves in the line of fire to hold the door shut.  Teachers are also being told to blockade the door with file cabinets and anything else that is heavy to make it as difficult as possible for an intruder to get into their room.”

Officer Geier also recommended that announcements over the public address system should be real-time, using plain language and specific details.

“Officer Geier said that historically the buildings that evacuated the most efficiently have kept information as simple as possible,” Wilson said.  “Instead of simply saying ‘Code Red’, it is better to be clear and direct – ‘alert – intruder in the main lobby’”.

Wilson said that most classrooms in their school district are on the ground floor and while many of the windows are too small to be opened for somebody to go through, the classrooms now have hammers readily available in order to break out the window to let students escape.

“Complete evacuation is the goal if an incident ever does occur,” Wilson said.  “Staff and students have been informed of locations to meet at should an evacuation occur.”

During Tuesday’s drill an alert went out that there was a shooter in the main lobby.  Law enforcement said within two minutes the building was clear.

Officer Geier said one issue that is always a concern is traffic congestion surrounding a building when emergency personnel are on their way.  He said if staff and students try to leave by vehicle it will create a bottleneck as they try to leave.  A bottleneck can also be created if parents are trying to get into the school.

This is why the school district is telling staff and students to evacuate on foot and asking parents to meet at the designated rally point as well.

“Emergency crews need to get to the school as soon as possible,” Wilson said.  “The sheriff’s office said that units would also be sent to the rally point to treat anyone who escaped but was injured.”

“ALICE is not being implemented to scare children or residents,” Dr. Fortmayer said.  “Our goal is to train them so they get used to it and know what to do should an incident or another emergency occur.  We will not be an ‘easy target’.  We will do everything we can to protect our students.”

To learn more about USD 247’s ALICE preparation and to learn what parents can do to help, visit https://usd247.wordpress.com/alice.