“We have great support here at Southeast for volleyball,” said Volleyball Head Coach Maya White who started the night. “This was my eleventh year and I can’t say enough about it. It’s a great school to coach for and luckily we’ve been able to have success and a tradition of volleyball here and that helps to continue it.”

Coach White said the young Southeast Volleyball team basically played each month as if they were two separate seasons.

“At the end of September we were 6 and 15 and we could have easily looked at that and said ‘alright we’re done, we’re not getting better, we’re losing all the time,’” Coach White told the crowd. “Then we rolled into October and our competition got harder and the girls continued to improve and we kept getting closer, and getting neck-and-neck with the harder teams and taking them to three (matches), then losing games by like 26-24. The girls did really well, and the whole time they did not get down on themselves. They kept pushing themselves and knew that they could keep doing better.”

The Southeast Volleyball team finished its season 15 and 24, and was the Sub State Runner Up, making them one of the top 16 teams across the state in Class 3A.

“If you happened to come to Sub State you could have seen the girls played as a team the best I’ve seen all season,” Coach White said. “It was really awesome to see that because as a coach you want your team to be playing as a team, supporting each other with one common goal and they did that.”

During the Sub State Championship game against Uniontown, Southeast lost the first game then came back in the second to force a third game.

“I even got teary eyed during that, thinking about that – ‘man, we’ve come so far’ – from the beginning of the season to where we were in the championship game and these girls did it – they had the vision, they had the goal, and it was awesome,” Coach White said.

Coach White announced that senior Bailee Ulery was named to the All-CNC 2nd Team and was voted by team members as the team’s MVP. This was Ulery’s 3rd year as a varsity letterman and her 3rd year as a captain for Southeast. Last year she was 2nd on the team in kills, blocks, digs, perfect passes and aces; and, this season she led the Lancers with 258 kills, 49 blocks, 188 serves received and 53 aces.

“She’s just a great player, good attitude, just a good spirit and a good person to be around,” Coach White said. “She’s a hard worker and she’s also a determined young woman.”

Coach White announced that sophomore Sailor Jackson was named All-CNC Honorable Mention and was named one of three girls who tied for the team’s Most Improved Award, again as voted on by team members. This season, Jackson was 2nd on the team in Aces, Kills and Serves Received, and led the team with 276 digs. She also had 204 kills.

Also receiving the team’s Most Improved Award was senior Kyra Stewart, and 2nd year varsity letterman and captain. Stewart led the team with 373 assists and broke a record since Coach White has been there – career assists for 6-2, with 495 assists. She is also 2nd in assists per match with 21.

The 3rd player to earn Most Improved was sophomore Saydi Sullivan, a 2nd year varsity letterman.

“Sub State was the best she had ever played and it was like ‘Saydi?!’” Coach White said excitedly. “We were so pumped because she was a dominant player at Sub State and it was pretty awesome to see that come all the way through, she was focused. I’m just really excited to see what comes with that next year.”

Coming off a knee injury that kept her out of softball this past Spring, sophomore Julie Martin was honored with the Most Inspirational Award by her teammates. Martin, on crutches at the banquet once again after reinjuring her knee at Sub State, is a 2nd year varsity letterman and captain. She was the dig leader last year and despite coming off her original knee injury, improved on that number.

“She worked super hard to come back from her ACL injury last year to make it back to play volleyball this year and she did amazing – even after she came back and was playing with her knee brace she improved,” Coach White said. “She had a great attitude and is a great natural leader, with great determination. (Coming off her injury) she learned from things and that helped her to grow as a person. I know it’s a trial now but I think it’s going to have good things come from it.”

Fellow captain Daisy Burns, a junior, is a 2nd year letterman and a 2nd year captain. She led the Lancers for the 2nd year in a row in serve percentage, with 311 serves and only 11 errors for a 96.5%.

“She has a great attitude, she’s a really really hard worker, and she’s fun and kind of makes sure the atmosphere on the court is laid back and having a good time, which is good, you need that,” Coach White said. “I was excited to see her step up vocally as a leader this year and be more confident in herself and she really helped our team on and off the court.”

Also receiving letters were junior Laura Riding, sophomore Megan Colvin and sophomore MaKayla Buffington, who missed being the team’s block leader by 7 despite having missed 14 games due to an injury.

On the Junior Varsity Volleyball side, freshmen Miranda Hartman and Anna Thompson were tied for Most Improved Players, junior Caitlin Low was voted Most Inspirational Player, and freshman Katie Bitner was voted as the squad’s Most Valuable Player.

Head Football Coach Jerrod Hansen tried something different this year, listing off 10 of his favorite things about the season. Some of those moments included a run against Uniontown where a much smaller safety bounced off of senior running back Colton Trejo, and Trejo then outran the rest of the defense for the team’s first touchdown of the season.

Also mentioned was senior lineman Logan Oplotnik grabbing a defender, trying to slam him to the ground, only to have the opposing player land on Logan’s brother, freshman Gage Oplotnik.

The “rumbling, bumbling, stumbling” drive to finish the season was brought up. Two senior offensive linemen were moved to the backfield and given the opportunity to carry the football.

“This was when I got to watch big Aaron Sterling drag, run over and through kids… my favorite part of that was after we took him out, I think he ran four plays in a row, and he came over and said ‘Coach that was fun, that was tremendous, but man that was tiring’ – so I think he has a whole new appreciation for running backs,” Coach Hansen laughed. “I think I saw Foster Martin run the fastest I’ve ever seen him go. He went through the hole so quick I thought he was going to fall down, but then when he hit some people he kept going.”

Coach Hansen’s number one moment of the season was a catch by first year football player, senior Hunter Jameson.

“I’m pretty sure it bounced off your hand, the defenders hand, and maybe something else before you finally caught it for a touchdown,” Coach Hansen said. “I felt like time stopped completely.”

“I’d like to say thank you to all of the young men that played football this past season – their hard work and passion is amazing and the fight they displayed was inspiring,” Coach Hansen said. “This year these guys really fought and really grew as people and as individuals. I’m extremely proud to have coached these guys.”

Southeast Cross Country Head Coach Laney Lawson was the last to take the podium and said she felt like the program took some big steps forward this year. The Boys team took 11th at Regionals, and this year they took 3rd at the home meet, 4th at CNC League and improved to 5th at Regionals, after taking 11th last season.

“Cross Country is not an easy sport,” Coach Lawson said. “There is no coming out and running the first two miles or even the first mile easy, and then thinking you’re going to come in and run fast to have a chance to have some success. You really have to run as hard as you can from the very start of the gun in order to have a shot to have success or even improve your time.”

Sophomore Trenton Hartman was voted by his teammates as the Most Improved; and, junior Jake Burns and senior Triston Gardner were named Most Inspirational. Most Dedicated – the team’s MVP – went to sophomore Tanner Craddock, who took 6th place at CNC League to be named All-Conference, and qualified for State, where he took 46th.

“Around 350 boys in just 3-A alone were running at all the different Regionals in Kansas, so to be able to come and run and place 46th out of that many kids, and that’s not even including the ones that didn’t get to run because only seven get to run on a team, that’s quite a lot of boys that I can’t even put a number to – so to place 46th at a state meet is still pretty admirable,” Coach Lawson said.

Last season there were not enough girls to field a team, and this year they took 2nd at the home meet, 4th at CNC League and placed 5th at Regionals, only 2 places from qualifying for State.

“I remember running (for Southeast) back when I was in high school and I was the only girl most years that ran,” Coach Lawson said. “To be able to look and see eight girls – eight smiling faces over here at me willing to put in the time and effort to run when they could be doing other things is awesome and I’m really glad to have them.”

Sophomore Jessica Humble received the Most Improved Award as voted on by her teammates and junior Sarah Clausen received Most Inspirational. Sophomore Jessie Jenkins received Most Dedicated following her first year of Cross Country where she took 7th at the CNC League Meet to be named All-Conference, took 2nd place at Regionals to qualify for State, and is believed to be the first Southeast girl to medal at State, with a 15th place finish.

The final award presented to each of the Cross Country teams was the Lancer Culture Award.

“On and off the running course are we doing a good job of representing our school and taking care of each other, being good teammates, being good role models for the community and things like that,” Coach Lawson said. “It’s probably my favorite award to give.” 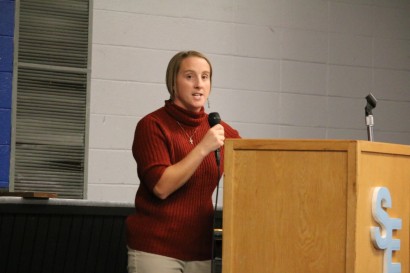 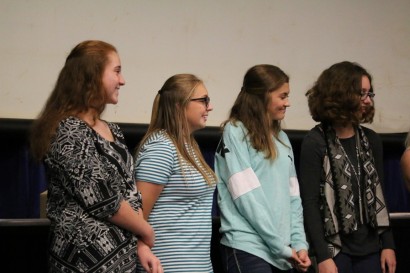 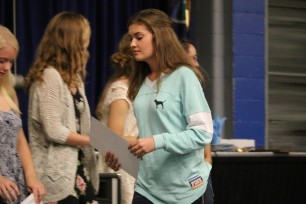 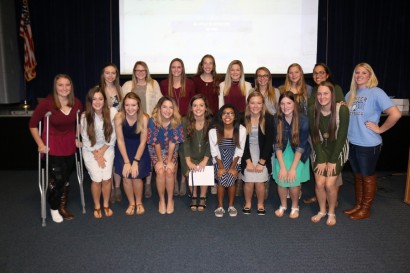